All the videos you want on your smartphone

Advertisement
Youtube is the official app for the world's largest and most popular video platform. It's home to millions and millions of videos, with hundreds of thousands of new clips uploaded every day.

From the official app, you gain full access to all the featured videos for each day, as well as an easy way to locate videos that deal with topics of your interest. All this comes via an easy-to-use interface that's perfectly adapted to smartphones and the added possibility to set up and use gesture shortcuts.

One of the most interesting features of the Youtube app is that you can play videos in the background while browsing other apps or sites. That way you can listen to music, for example, while working on something else. Plus, you can close any video simply by sliding your finger over the screen.

Another exciting feature of the official Youtube application is that it lets you broadcast videos you're playing on your Android device by setting up a Chromecast. You can also run voice searches directly from the app itself.

Youtube for Android is a very useful app for any regular Youtube user. It makes browsing YouTube a lot more convenient than from your browser. In fact, Youtube is an app recommended for virtually anyone with an Android phone.
Reviewed by Andrés López
Advertisement

To create a playlist on Youtube, open the video you want to add and tap the Save button. After that, you'll see a menu where you can create a new playlist or add it to one that already exists.

To create video clips on Youtube, open the video you want to create a clip of. Tap on Clip and choose the segment you want to clip. Add a name, then tap on the share button to send it.

How do I save a video on Youtube to watch it later?

To save a video on Youtube to watch it later, tap Save and select Watch later.

Good. Can replace the old version. although because in the current version there are many bugs, so Now I can choose my own version! Which is old

too many stupid ads 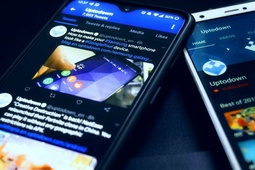 May 29th, 2019 How to activate night mode in your favorite Android apps TikTok
Add music and effects to your videos and share them!
CapCut
An easy way to edit and add effects to videos
KineMaster
A simple yet powerful video-editing tool
MX Player
Play any video file on your device
Netflix
All Netflix movies and series now on Android
DU Recorder
Powerful tool to record what is happening in your screen
JioTV
Only for JioSIM users
Snack Video
Post and watch short videos on this platform